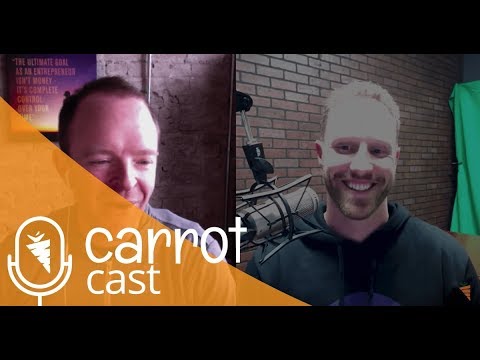 People talk about this a lot, you gotta believe it before you see it and I’m truly and example of this. I didn’t even really know how to do any of this but I believed I can make an impression in the real estate community. In the investment world I knew it could create an income that I would be happy with but I also knew I could create a life that I wanted.  Justin Colby

** Before you dive into this episode of the CarrotCast, it does contain some profanity. **

I’ve got a great, great guest on this episode of the CarrotCast. I’ve known Justin for years and years. He’s actually at my last Mastermind in Sedona Arizona, so I wanted to bring him on to talk about how he’s building his business, and what he’s really shifted in a big way for 2018.

What was working for him to wholesale and flipping houses to the tune of 100 plus last year, is not working for him going into this year quite so much, so he is going to be adjusting those in massive ways.

Justin has a great story. He is kind of one of those guys who came from being completely broke, and he talks about a pretty funny story of how he and his friend kind of skirted the car impound people by trading cars multiple states away for a period of time to keep their cars a little bit longer. Some funny, funny stuff, entrepreneur story stuff.

He also digs into the mindset and how they scaled their business from doing a couple deals to over a hundred in a year. And they’ve done 700+ deals so far in their career. He breaks down what’s working for them now versus what wasn’t.

Let’s dive into Justin Colby’s story on how he went from being broke and struggling to scale his business working five hours a week in his business now, how he formed a great partnership, what to look for in partnerships. All kinds of amazing things!

Find more episodes of the CarrotCast and be sure to let us know how we’re doing. We appreciated your feedback!

“Don’t quit. Never give up trying to build the world you can see…” – Sim… Click to Tweet

This episode of the CarrotCast is a story that will guide, amplify, and inspire you to work hard and never give up on your dreams. Find out how Justin Colby has been able to use his flipping houses model to achieve his goals and sense of giving.

4:15 – Breaking down Justin Colby’s story. He’s twisting path to real estate investing.
12:00 – Why it’s so darn important to have a “when” mindset rather than an “if” mindset.
16:40 – Need to organize and predict your business and growth? How and why you should create a vision story.
19:40 – The moment where Justin decided to build a team and what he’s workweek looks like now after fully implementing this change. The story “From Repos to Wealth.”
24:25 – Why hedge funds are back.
26:15 – What has and hasn’t worked on the partnership side of his business and the power of personality tests.
32:10 – Real estate marketing: What worked in 2017 and what they will be doing going forward.
37:40 – What to start a cold calling strategy? What list Justin uses and how many calls they make to close a cold call deal every 21 days.
41:00 – Bandit sign strategy built for his house flipping needs.
42:10 – Giving back is a major part of why Justin has built his business. Find out how he achieves this, where his business is spending money, and what for what.
45:35 – Guiding people along a path to change their family trees.
49:05 – Find out more about Justin Colby at The Science of Flipping.

One response to “EP 86: What It Takes To Go From Being Broke to Closing 100+ Deals Per Year w/ Justin Colby”