Steve Londeau has been a Carrot member for 4 years now, since the beginning of 2015.

Before he joined, he had a custom WordPress website that he had sunk lots of time and money into, with a “hideous” opt-in form — as he describes it — and an unsatisfying conversion rate.

For two years, from 2013 to 2015, that website generated four leads for his business, all of which fell through and didn’t close…

Frustrated with that slow-moving lead-gen, he switched to Carrot and saw an “immediate difference.”

“I had four ‘deals’ that I got from my website pre-Carrot and none of em’ even closed. Since then… I instantly noticed a change when we went from my WordPress site to the Carrot content — it was like night and day, I started getting leads right away. And we started converting them, cause they were quality leads… and now we consistently close 6-figures just from our website every single year.”

Now, business is booming. Steve does between 40 and 60 deals per year at $13,000 – $14,000 profit, paying about $2,000 for each deal. And his methods aren’t complicated: he combines direct mail, retargeting Facebook ad campaigns, and his high-converting Carrot site into a super smart, dead-simple marketing strategy that every real estate investor should steal. And he’s getting into something called “wholetailing” which I hadn’t even heard of before listening to his full interview with Trevor.

What are his secrets?

Let’s break it down.

First and foremost, Steve gives a lot of credit to his Carrot site. As someone who built a custom WordPress website and experienced sub-par performance and a staggeringly low conversion rate (just 4 leads in two years), his Carrot site was a breath of fresh air. 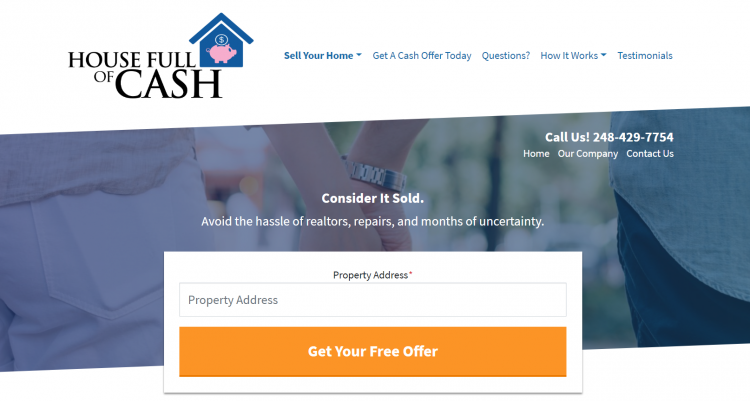 He didn’t sign up for Carrot right out of the gate, though. In fact, it took him 2 years, knowing about Carrot the entire time, to finally bite the bullet. And he’s glad he did.

But what took him so long to make the leap?

Well, his two concerns were the same that many people have when they’re thinking about signing up with us…

Eventually, after he signed up and saw the results that his Carrot website was pulling…

…he realized that (A) Carrot was paying for itself 10 times over, consistently converting high-quality leads and driving high-quality traffic — now he pays for our Advanced Marketer plan ($150 per month) to get the Hemlock template, which further differentiates his site from competitors — and (B) no one has ever said that his website looks like another competitor’s website in his market, so he’s not worried about it ;-)

When Steve signed up for Carrot, he put in a lot of leg work over the first year to build his rankings and drive passive traffic to his website. He did so by posting Carrot content (provided with our Content Pro and Advanced Marketer packages) and by targeting market-specific keyword phrases on his homepage.

After a few months, his website ranking soared to position #1 for some high-volume keyword phrases (such as “sell my house fast in Detroit”).

This traffic spike in September a few years ago was probably associated with that boost in SEO rankings.

But like a weight-lifter who gets a 6-pack abs and then gives himself permission to stop working out because he’s already made it, Steve admits that he stopped working on SEO, thinking he’d just get to keep his #1 position and that they’ve now lost some of their rankings because of that.

And while SEO still drives some traffic for his website, it doesn’t drive as much as it could.

Note: Remember, real estate SEO is a long term game. While snagging position #1 and driving passive traffic to your website is amazing, it only lasts as long as you keep working to maintain your rankings by publishing new content, building backlinks, and targeting market-specific keywords.

But his website is still ranking for “sell my house fast in metro Detroit.” 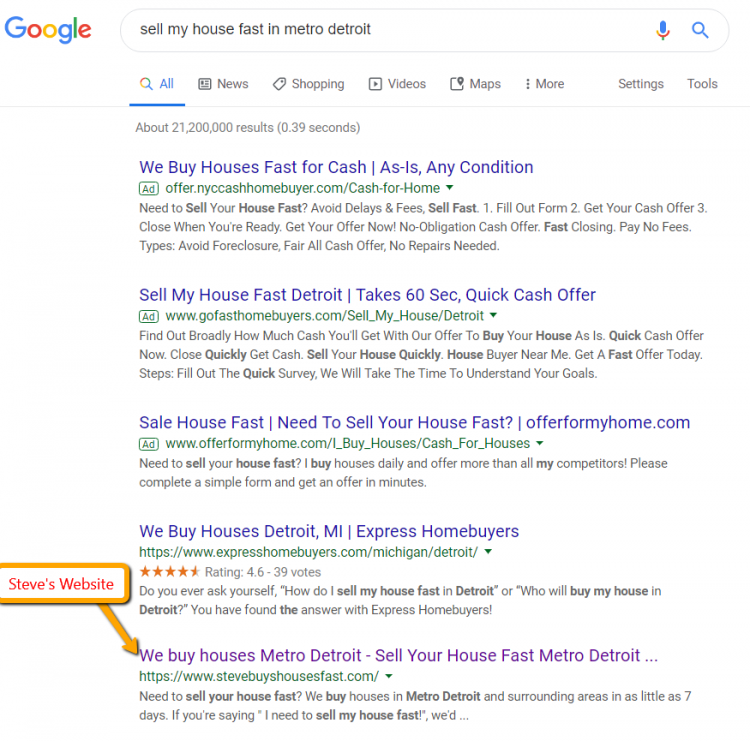 Go here to learn all about SEO in Carrot University!

Blog content on Steve’s website has been another driver of organic traffic — meaning, a motivated seller types something into Google (like “how to sell a distressed property”), one of his blog posts show up in results, and the person clicks on it.

And that doesn’t just help brand awareness in his market, some of that traffic even turns into deals.

The best part, though, is that Steve, doesn’t write any of that content himself (even though it’s under his name), he just uses the SEO-ready content that comes with his Carrot Advanced Marketer plan (24 blog posts per month). 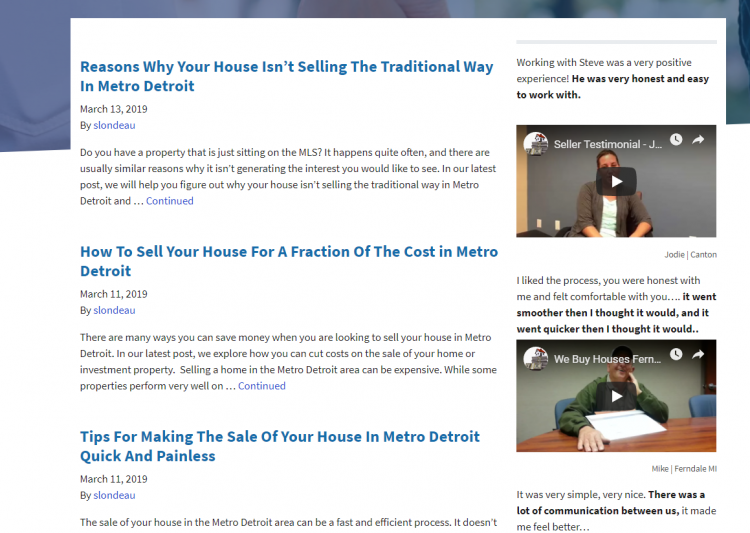 And as you can see, his blog URLs are pulling their own weight for traffic and lead generation. 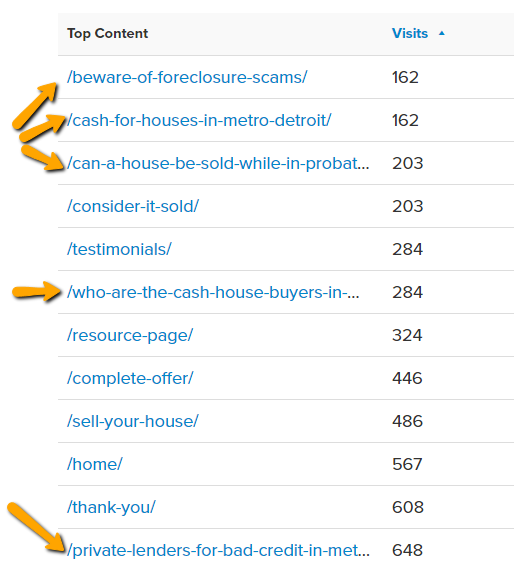 Plus, that consistent content publishing practice (almost one blog post per day on the Advanced Marketer plan) gives you an excuse to interact with your social media followers by sharing the content, informs Google that your website is active and trustworthy, and gives you an opportunity to rank in search engines for high-volume keyword phrases.

Which is why, at Carrot, we take content so darn seriously. :-)

I hadn’t even heard of this before listening to Trevor’s interview with Steve, but it’s a fascinating concept and one that I think you’ll be interested in learning about (if you haven’t already).

Basically, wholetailing is a combination of wholesaling and retailing. You purchase a house that takes little to no rehab work and instead of selling it to another real estate investor, you just list it on the MLS. The advantage being, you can often sell the property for more than you could when wholesaling to your buyers list. This means, of course, that you’d need to buy a property which is in almost MLS-worthy condition… and that’s the key: finding a property which takes little to no work to prepare for retail buyers, and then selling it at a discounted price on the MLS.

And from my research, this strategy seems to be getting more and more popular as sellers dominate the market.

One final tip that Steve has on finding buyers for properties you’re trying to wholetail: call agents who have recently sold properties in the same area and ask if they have any buyers who are still looking for a place. Then offer your property as somewhere those buyers might be interested in checking out.

This is one of my favorite strategies that Steve shared to generate leads and close deals.

If they visit his website after receiving his postcard (which many of them do, to figure out who he is and if he’s trustworthy), they immediately get tagged with his Facebook advertising pixel. That, then, allows him to retarget those website visitors on Facebook with his ad campaigns, helping him make the most of every person that visits his website, and collect leads even when people don’t opt-in to his website form.

Testimonials are super powerful for converting a website visitor into leads. Here are some stats to prove it.

And video testimonials might be the best way to take advantage of those stats since videos are a consumer’s favorite type of content to engage with from a brand.

(Check out our VideoPost tool for turning videos into blog posts!)

For that reason, Steve puts lots of video testimonials on his website. 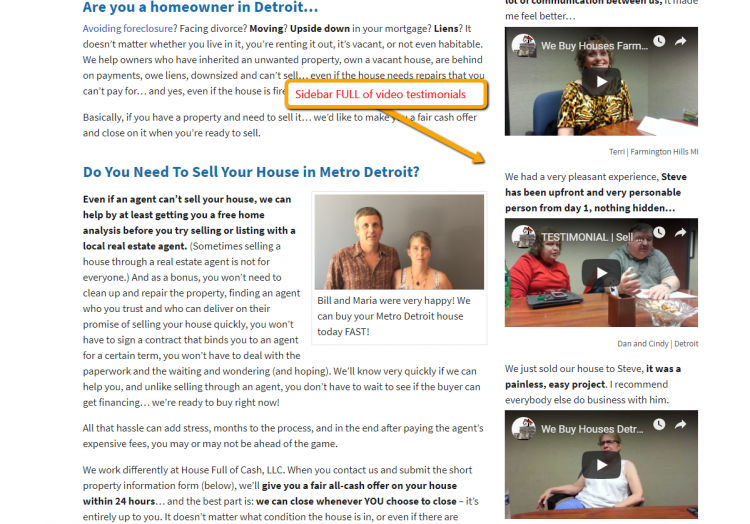 It’s a small thing that can help convert more of the people who visit your website. After all, website visitors want to know that they can trust you, and nothing is quite as convincing as a ton of people vouching for you on recorded video.

I hope this case study helps you build a bigger business, generate more consistent leads, and live the life that you’re working toward. Even if just in a small way. And I hope you learned something new!

And if you want to walk in Steve’s shoes, consider getting yourself a Carrot website. We have the highest-converting websites on the market for real estate investors and agents and we’d love to help you just like we’ve helped Steve.

You can even try our demo out for free!

Whatever you decide, go at it with full steam, ready to win. 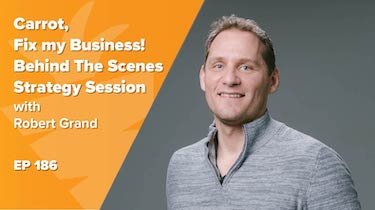 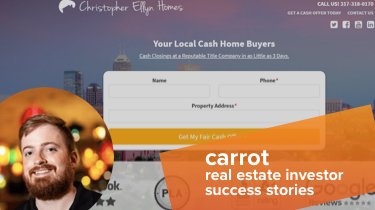 Carrot Success Story: How To Drive 7 Figures Through Your Carrot Site With Ryan Dossey 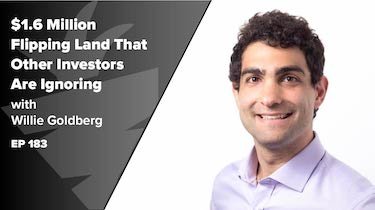